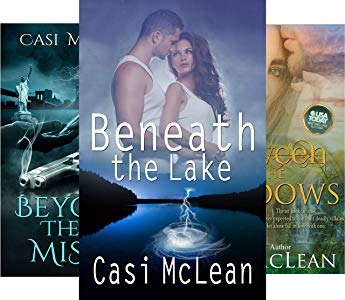 Shadows of the past linger in a town time forgot, a ghost town that lies beneath Atlanta’s famous man-made Lake Sidney Lanier. Chilling lore mounted as victims vanished beneath the surface, trapped below sheared-off trees and crumbling town remains. The mystery and strange phenomenon sets the stage for my Lake Lanier Mysteries series. Could blasting initiate a seizmic shift creating a portal through time? Beneath The Lake, [Beyond The Mist released August 2017, and Between The Shadows October 2018]––tales forever bound by a tiny hamlet nestled in the north Georgia mountains, and the eerie lake that swallowed everything in its path.
Join me for a trip through time as I share Brent Swancer article describing the ghostly apparitions, freak accidents, and mysterious murders attached to Atlanta’s cursed lake iand discover… 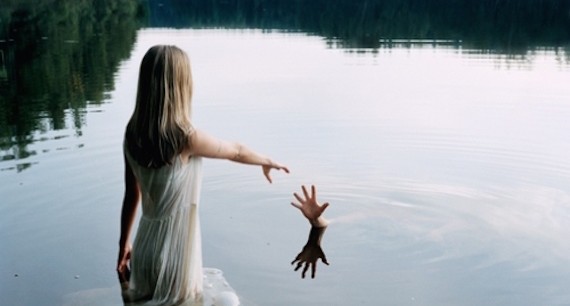 Some places in this world seem mysterious…to the point where they almost seem to be beyond the comprehension of mankind. There are mysteries in these places that defy any attempts to explain them, and the very soil and water itself here seems to reverberate with some evil force that pervades its very being. These mysterious places seem to draw death, misfortune, and the bizarre to them like a magnet, and if there are indeed cursed places in this world then these are them.

One such enigmatic place…

..can be found nestled within the rolling, verdant foothills of the northern mountains of the U.S. state of Georgia. This is a locale that has long been associated with strange phenomena, weird creatures, and most sinister of all, a large number of inexplicable deaths and unsolved murders. This is the cursed lake of Georgia…

Lying in the northern part of the U.S. state of Georgia, sprawled out among the foothills of the North Georgia Mountains for 26 miles, 75 meters (258 feet) deep at its deepest point and with an area of 150 km2 (59 square miles) of water and 1,114 km (692 miles) of shoreline, is Lake Sidney Lanier, 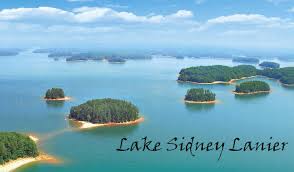 commonly referred to as simply Lake Lanier. Actually a manmade reservoir, Lake Lanier is the largest lake in Georgia and even sports a chain of islands that were originally large hills before the lake was formed.

The origins of Lake Lanier can be traced back to 1948, when the U.S. government purchased a 100-acre farm from a river ferry operator by the name of Henry Shadburn in order to start a water project on the Chattahoochee River for the purpose of providing the city of Atlanta with hydroelectricity, flood control and water supply. In 1950, the U.S. Army Corps of Engineers began breaking ground and constructing the Buford Dam on the Chattahoochee River, which would be completed in 1956 and begin the process of flooding the foothills to create the lake.

The creation of Lake Lanier was beset with problems from the beginning.

Funding for the project faced numerous hurdles which stopped and started construction to the point where it is amazing it was actually finished on schedule. Additionally, the Corps of Engineers, as well as the states which use the Apalachicola-Chattahoochee-Flint River Basin and the Alabama-Coosa-Tallapoosa River Basin, comprised of Florida, Georgia, and Alabama, all squabbled over water flow requirements, consumption caps, how the water should be used, and whether to give it priority as a water supply, hydroelectricity source, or even recreation.

All of this while juggling the federal laws that demanded water be set aside for threatened or endangered species that lived in or around Chattahoochee River.

The states of Alabama and Florida were particularly unhappy about how the U.S. Army Corps of Engineers regulated the flow of water from Lake Lanier to their states. There was even debate over what the lake should be called, with the builders finally settling on the name of the poet Sidney Lanier.

Then there was the rather destructive nature of the lake’s creation. 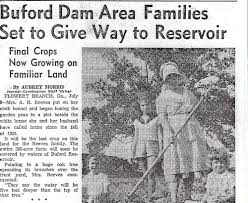 The U.S. government began a mad dash to ravenously purchase land from private companies, farmers, and anyone else who lived in the area that would inevitably wind up underwater. During the 5 years it took for the lake to completely fill to its intended water level, the government would buy up over 50,000 acres of prime farmland and pristine wilderness, moving more than 250 families, 15 businesses, and even relocating 20 cemeteries along with their corpses in the process. As the nooks and crannies of the mountain foothills filled with surging water, the inexorable spread of the lake devoured entire towns along with their buildings and houses, farmland, fields, bridges, toll gates, historical landmarks, river ferry businesses, a racetrack called Looper Speedway, country roads, forests, and other lakes.

Many of the structures that would be inundated were simply left as is, so that if one were to walk along the lake’s bottom one would find submerged towns complete with roads, walls, and houses all eerily intact; abandoned underwater ghost towns inhabited only by fish and perhaps ghosts of the past. Even the ferries that were put out of business by the lake’s creation were simply abandoned to become rusting hulks littering the bottom and the shore…

I’ll leave Brent’s story there until my next post. But in the mean time…

Imagine you just saw your fiancé groping someone else. You tear off into the throes of a torrential storm, hydroplane and flip your car. Thrown into the lake, you lose conciousness and awaken with no idea where you are. The scent of the hostile spring storm now gone, you breathe in the smell of a cool, crisp November settling into the North Georgia foothills. Feel the anxiety upon opening your eyes, realizing you’re in the arms of a complete stranger, then discovering you’re in a place you’ve never heard of––thirty four years before you were born. You’ve fallen through the time portal beneath the lake.

Buy Beneath The Lake Now on Amazon: