Check out the full review on Amazon: 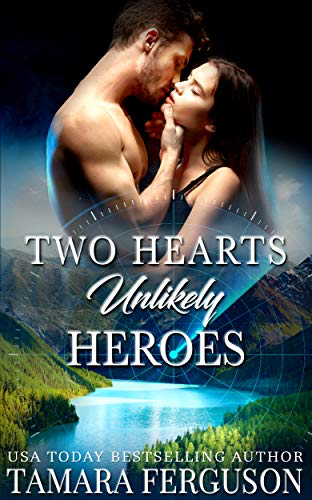 Wow – Tamara Ferguson does it again!

TWO HEARTS UNLIKELY HEROES is  a military, medical romance of star-crossed love and second chances. I am continually amazed at how this author captures my heart with her richly-drawn, war-ravaged characters. I feel the pain of their physical injuries and glimpse into the mental anguish torturing their souls.

In Two Hearts—Unlikely Heroes, Ferguson weaves a steamy romance then thrusts the couple into impossible situations, all while giving the reader a taste of military life.

The story begins in Afghanistan where hero, Lieutenant Benjamin Nash, discovers Air Force Lieutenant Samantha Caldwell, our heroine, lying on the side of a road with a mangled leg.

Two years later, they run into each other in Crystal Rock, Wisconsin and are once again thrust into the crosshairs of a terrorist.

Tamra Ferguson has an incredible talent that spins the reader into a nail-biting situation ultimately satisfying them with a happily ever after…but along the journey she somehow emboldens my sense of patriotism, hope, true love, and second

chances. If you love military thrillers I highly recommend this book and all of her Two Hearts series!

When Wounded Warrior Captain Samantha Caldwell Is Being Targeted By Terrorists After Killing Their Leader In Iraq, Can AFOSI Agent Captain Ben Nash Keep Her Safe?

When Captain Samantha Caldwell’s team is hijacked by terrorists in Iraq, her quick thinking results in the destruction of both the munitions they were transporting along with the attacking insurgents. But her actions come with a cost, and Samantha is injured from gunfire after sending her team running for their lives.

Assigned to the team following behind, Captain Benjamin Nash has been warned that the intel provided may no longer be accurate, and their mission may have been compromised.

When Ben comes across a severely injured airman near the road while scouting ahead and discovering the wreckage, he manages to radio for a chopper. They’ve never met, but when Samantha momentarily regains consciousness, Ben feels a strange connection once they speak.

But trouble strikes during the rescue, and this time Ben ends up shot as the chopper is preparing to depart.

Two years later, in preparation to become an AFOSI agent, Ben is sent to a training facility in Crystal Rock, Wisconsin, and the last person he expects to see is Samantha, who’s working there as an instructor. Not knowing her name or rank, Ben had been making discreet inquiries about her for several months, trying to discover if the woman who’d been severely injured had survived.

It doesn’t take long for Ben to realize that Samantha is special, and he would do anything in his power to have her. But Ben is there pretending to be an airman since he’s been sent there for other reasons besides training.

Sam is feeling the same way about Ben, but she’s avoiding him as much as possible. Although she can’t quite put her finger on why she thinks Ben is more than he appears, there would be serious consequences if she entered a relationship with someone beneath her in rank.

But everything changes when Colonel Pierce meets with Sam and Ben and discloses Ben’s actual mission. Can Ben keep Sam safe from the terrorists who’ve targeted her after she apparently killed their leader during that fateful mission in Iraq?

Despite their serious subject matter, the Two Hearts Wounded Warrior stories are all about hope, with happily-ever-after endings. This #1 bestselling series has won over twenty combined awards, including the Readers’ Favorite BRONZE (2019 & 2018), SILVER (2019 & 2016) and GOLD (2018) MEDALS in Military Fiction.

If you don’t believe in the power of fate, you shouldn’t read her stories, because Tamara always writes a happily-ever-after for her heroines and heroes, since it doesn’t always work out that way in real life.

Along with the 2015 Romance Reviews Readers’ Choice Award Winner That Unforgettable Kiss, Two Hearts Surrendered and Two Hearts Unspoken were also finalists for the 2016 IAN Book of The Year. Tales of the Dragonfly In Tandem was a romance finalist in the Indie Excellence Awards, while Tales of the Dragonfly In Flight was a romance suspense winner at the Readers’ Favorite International Book Awards.

A member of the RWA, the Authors’ Billboard and the Authors’ Independent Book Network, her stories have been included in several #1 bestselling anthologies.

Since she remains a full-time caregiver for an autistic son (along with a bunch of adopted pets!), you can usually find Tammy working at home, where she spends a lot of time not completing her numerous home improvement projects, because she’s writing or helping author friends promote their books on twitter.