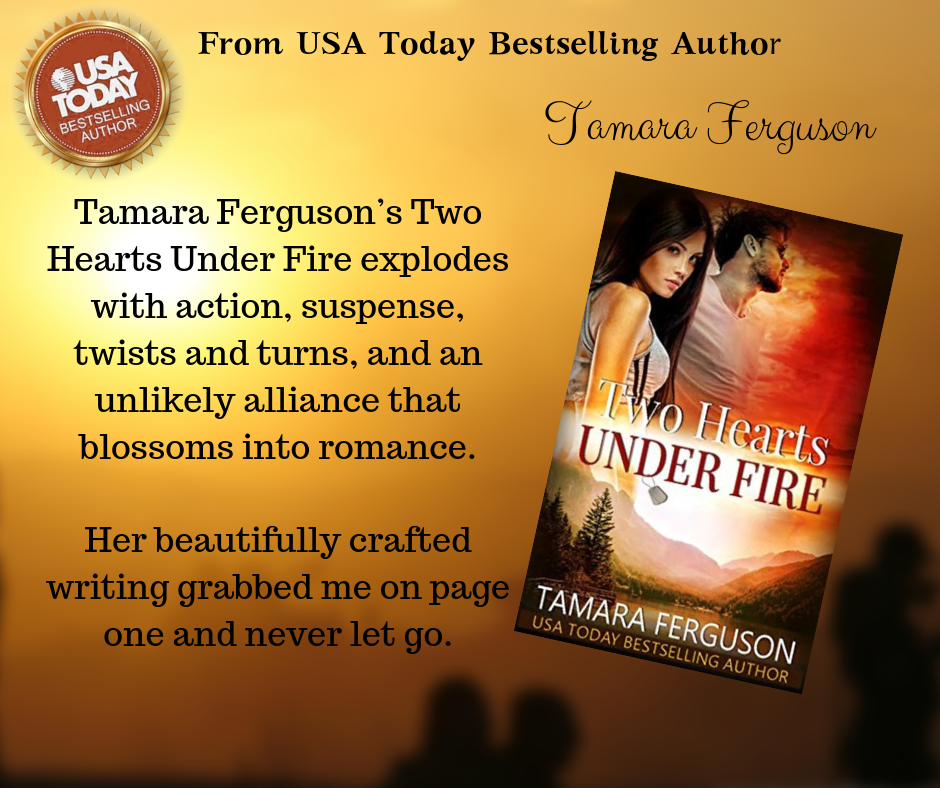 Tamara Ferguson’s Two Hearts Under Fire explodes with action, suspense, twists and turns, and an unlikely alliance that blossoms into romance. Her beautifully crafted writing grabbed me on page one and never let go. After reading only a few of her Two Hearts series, Ferguson is quickly becoming a go-to author, who I know will provide a quick read to sweep me away into a happily ever after. Richly-drawn characters I love to love, woven into exceptionally-handled, real life drama ripped from the pages of current events, charges her plots with believable storylines. And backdrops using well-researched military themes bring the challenges facing our United States veterans front and center, which I absolutely love. In Two Hearts Under Fire, Russ Quinlan and Claire Ellis, each running from eminent danger of their own, join forces in a fast-paced thriller. Dodging danger at every turn, they manage to fall in love — the kind of love everyone desires. I highly recommend Ferguson’s Two Hearts Under Fire—or any book in this series—to anyone who loves a good romance in a fast-paced story you won’t want to put down.

Two years ago, members of Airman Russ Quinlan’s team were targeted and captured during transport in Iraq. When Russ discovers the only other survivor was left for dead after a brutal assault by insurgents, he realizes this covert mission had resulted in deadly consequences, and someone was trying to frame him.
When Russ decides to enlist help from AFOSI Agent Brand Reardon, he finds Claire Ellis instead. A close friend of Brand’s fiancé Sarah, Claire’s staying at Brand’s Quantico apartment temporarily, hiding out from an abusive ex-husband who’s trying to kill her.
When an assassin attempts to gun them both down, Russ is able to avert the attack, turning the weapon on the killer.
But who was the intended target? Russ figures their only option is to run, heading to Crystal Rock, Wisconsin to enlist Brand and Sarah’s help.
But something crazy happens to them both along the way. Can two wounded hearts under fire survive love?

If you don’t believe in the power of fate, you shouldn’t read her stories, because Tamara always writes a happily-ever-after for her heroines and heroes, since it doesn’t always work out that way in real life.

Two Hearts Surrendered was also a New Apple Romance Selection for excellence in Indie Publishing and 2018 Top Shelf Finalist. Two Hearts’ Christmas Wish is a 2017 IAN Book of the Year Finalist. And it’s the #13 BEST INDIE BOOK of 2017.

Along with the 2015 Romance Reviews Readers’ Choice Award Winner That Unforgettable Kiss, Two Hearts Surrendered and Two Hearts Unspoken were also finalists for the 2016 IAN Book of The Year. Tales of the Dragonfly In Tandem was a romance finalist in the Indie Excellence Awards, while Tales of the Dragonfly In Flight was a romance suspense winner at the Readers’ Favorite International Book Awards.

A member of the RWA, the Authors’ Billboard and the Authors’ Independent Book Network, her stories have been included in several #1 bestselling anthologies.

Since she remains a full-time caregiver for an autistic son (along with a bunch of adopted pets!), you can usually find Tammy working at home, where she spends a lot of time not completing her numerous home improvement projects, because she’s writing or helping author friends promote their books on twitter.