Best selling author, Tena Stetler, uses her over-active imagination to spin tales of paranormal romance/suspense and cozy mysteries. Her spicy romances spin the adventures of magical kick-ass women and mystical alpha males that dare to love them. From demons to faeries and witches to vampires her intriguing characters take roads less traveled to draw you into exciting tales that  engage the imagination and warm the heart. We ar excited to feature Tena Stetler as our ABA’s Awesome Bewitching Authors Highlight.

Tena’s Inspiration for A Demon’s Witch:

A Demon’s Witch was my debut novel and has remained close to my heart. A Demon’s Witch hit the market and garnered best seller status. It earned The Romantic Reviews Readers Choice 2016 Nominee in the paranormal romance category.   I love talking about this story.

The ideas begin to percolate as I sat in a beauty salon listening to the chatter from other customers. One woman swore she’d been approached by a vampire want-to-be.

This got me to thinking, which is scary in and of itself. What if the hairdresser was an alpha male, Demon Overlord of the Western Hemisphere that owned a multi-species salon in Washington DC? Enter a powerful witch, whose beauty caught the eye of the demon on a rainy day when she rushed into his salon. Now, unbeknownst to him, she is not any ordinary witch, but the little sister of the demon’s enforcer. Now you have a romance with unbelievable complications.

The story became a series, but the other planned books in the series took a strange turn when the majority of readers and reviewers clamored for the enforcer, Tristian’s story to be next in line. I’d never considered writing a book on the witch’s brother, the demon’s enforcer. But after mulling it over for several months and publishing three unrelated books. I am excited to announce A Warlock’s Secrets (Tristian’s story) is awaiting cover art and will be published spring 2017. So please watch for it! 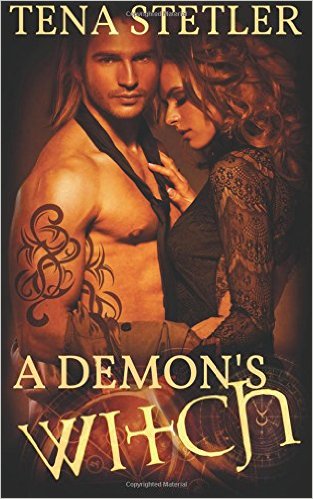 For a chance to win an amazon $5.00 GC or a e-book of A Witch’s Journey please sign up for my newsletter at  http://www.tenastetler.com and Like my facebook page at http://www.facebook.com/tenastetler.author.

A peek into A Demon’s Witch

Keeping a lid on all the paranormal beings inhabiting Washington D.C., is a daunting job. Bruce, a six hundred year old demon and the Territory Overlord of the Western Hemisphere, keeps his finger on the pulse of DC’s power players through the activities at his highly successful Wycked Hair Salon. His movie star good looks and body builder physique keeps his dance card full and the rumor mills running.  Within these walls, his anonymity is safe, mostly.

Bruce’s world spins out of control when Angelique, a pint size, gorgeous witch, with an attitude breezes through the doors of his salon. She is the younger sister of Tristian, Bruce’s long time trusted enforcer, whose professional skills are second to none. Tristian is furious at the relationship between Bruce and Angelique, a dangerous situation, but something darker threatens them all. Will undeniable attraction between demon and witch tear their worlds apart?

At two in the morning he awoke feeling her restlessness, listening he heard her soft sobs. He pulled on his black silk lounge pants and grabbed the robe from the foot of his bed. Padding silently in his bare feet down the hall, he paused at her bedroom door just as her anguished scream filled the room. He was at the side of her bed a second later. Gathering her onto his lap, he held her unyielding body to his until her flailing limbs quieted and her troubled violet eyes opened. Cognizant of where she was now and with whom, she flung her arms around his neck and clung tight as shivers racked her slight frame.

Megan came running from the other wing of the house where the staff lived during the week. “Is everything all right?” She peeked inside Angie’s bedroom door.

“Just a nightmare, nothing to worry about. She’s awake now.

“Oh no my Lord,” Megan said in a low frantic whisper.

“Don’t call me that,” he growled, his amber eyes tinged with orange glowed in the dark room.

“Sorry. There’s something dark and dangerous chasing that one.” She nodded in Angie’s direction. “It’s not of this world.”

He lowered his voice and spoke kindly. “Go back to bed, I’ve got this handled.” He paused for a beat exhaling slowly. “For now.”